In the fall of 2010, after months of discussion, a decision was made to build a new web presence for EKU in-house. A devoted team of four began working to create a new look and system for EKU with the goals of student recruitment, retention and student success always at the forefront. An open source content management system (CMS), Drupal was selected for developing and building the custom system.

The reason for building a CMS was to give each College and Department an easy way to keep their content current on their own website while maintaining a consistent look across the entire EKU web presence. The CMS is as easy as using Word to create interesting news, upload pictures and videos, and create webforms. Putting the control of making changes into the hands of content creators and publishers, those closest to the content, provides the opportunity to create content rich webpages.
View all CMS Support

Rollout pages including the EKU Homepage, Admissions and Housing were unveiled.  Shortly thereafter, Nick DeNardis, a well-known web site reviewer for Edu Checkup reviewed the launch pages. The site was given high marks with an overall A. The site design (visuals) earned a near perfect score – a rarely given 99%. 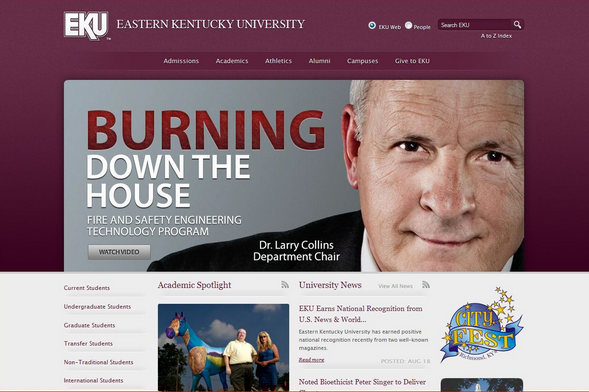 The next priority was to move all the Colleges and Departments into the EKU installation within one year. Individual and group training for using the CMS was provided initially to each of the Colleges, then departments, and groups. It is estimated over 1000 hours of training occurred during this time. EKU’s new website was also selected as one of the top three higher ed websites in the “redesigned” category by eduStyle. During the eduWEB Conference in San Antonio, Texas the EKU website was chosen by People's Choice voting as the winner.

The deadline for moving websites into the EKU Content Management System (CMS) was announced for Aug. 1, 2012. Since the rollout in August 2010, approximately two thirds of the websites had moved.

In July, 2011 a decision was made to test the newest Drupal Content Management System (Drupal 7) during a redesign of the IT website. When the site launched 6 weeks later, it was the first responsive site in the higher ed environment in Kentucky. After a successful launch, all sites in the EKU web presence were converted and became responsive to any device a visitor might be using.
View the original Inside Look Story

Since the launch of the new Content Management System, over 400 sites have been created. Two complete redesigns have occurred. The most recent resulting from a student and employee survey. The original intent is now well established:

We still continue to add sites and offer training to new owners. We offer refresher courses upon request. We analyze sites annually using built in Google Analytics so site owners can see how visitors navigate their site and the content they consume. Content Analysis are completed as requested and pair well with the Google Analytics report when a site is refreshed by the owners.